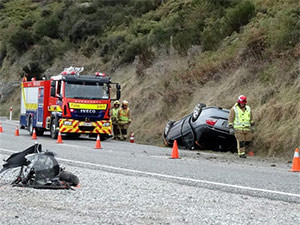 ON AUGUST 2, 1947, an airplane flying west from Buenos Aires, Argentina, radioed the airport in Santiago, Chile, that it would be arriving in just four minutes. It never arrived. The disappearance of the plane–named Star Dust–became one of aviation’s most baffling mysteries.

Then, in January 1998, two mountaineers climbing Mount Tupungato, one of the most formidable peaks in the South American Andes, made a grim discovery. They found one of Star Dust’s engines, along with scraps of metal, tattered clothing, and a mummified human hand.

The discovery of Star Dust’s remains served only to deepen the mystery of its disappearance. Why had traces of it shown up now, when exhaustive searches up and down the Andes had revealed nothing? Where had the plane been all that time? And why was the plane, which had radioed that it was only a short distance from touchdown, found more than 80 kilometers (50 miles) from the airport?

Soon after the plane’s discovery, the Argentine army sent an expedition up the hazardous 6,800-meter (22,000-foot) Mount Tupungato to retrieve and analyze the wreckage. The debris lay more than two-thirds of the way up the mountain’s eastern face on Tupungato glacier. A glacier is a vast sheet of ice that forms when more snow falls during a year than can melt and evaporate. The freshly fallen snow on a glacier, called neve, is compacted by its own weight into denser snow, called firn. As more neve piles up, the firn is then compacted further and turns into glacial ice.

Crash site investigators found that the debris was contained in an area of about 1 square kilometer (0.4 square mile) at the snout (lower end) of the glacier. Every bit of wreckage indicated a high-speed impact into the mountainside. When a plane flies into a mountain, most of the energy of the collision smashes the aircraft into small pieces.

Analyzing the broken bits further, the investigators found no signs that the plane’s machinery had failed. So what had caused Star Dust to crash? And where was the rest of the plane, since only about 10 percent of it was lying on the glacier?

To find answers to those questions, the investigators turned to Juan Carlos Leiva, a glaciologist, or expert on glaciers. He explained that glaciers are giant rivers of ice that move under the pressure of their own weight, flowing downslope with the pull of gravity. Depending on its size, a glacier can move anywhere from 30 centimeters (1 foot) to 15 meters (50 feet) a day. That meant the wreckage wasn’t at the crash site at all!

The investigators reasoned that the plane had likely flown straight into the snow-covered east face of Mount Tupungato. The violent impact triggered an avalanche, burying Star Dust in seconds. As repeated snowfalls turned to glacial ice, the plane sank deeper into the glacier, which gradually carried the wreckage down the mountain. Once the entombed plane reached a lower altitude where the glacier was melting, parts of it were exposed to the air. The other 90 percent of the aircraft is expected to surface as Tupungato glacier continues to move and melt.

The avalanche and glacier explained why Star Dust disappeared. But why did the plane crash in the first place, so far from its destination?

Investigators concluded that the accident must have been caused by a navigational error. Back in 1947, pilots did not have radio navigational aids to tell them where they were. Pilots simply charted courses and speeds based on weather forecasts and looked out the window to check their location.

Star Dust’s experienced crew knew that snowstorms had been forecast for the Andes that day, so they decided to fly above the clouds. What the crew would not have anticipated, because it was largely unknown at the time, was that an invisible phenomenon could affect their flight. Called the jet stream, this powerful wind current blows west to east around Earth above normal weather systems at altitudes of more than 6,100 meters (20,000 feet). The jet stream can reach speeds of 480 kilometers (300 miles) an hour.

When investigators analyzed old weather charts, they discovered that on August 2, 1947, Star Dust was flying right into the jet stream. The crew would have had no idea the plane was being dramatically slowed by winds of 160 kilometers per hour (100 miles per hour) blowing straight at the plane. Minutes before Star Dust was scheduled to reach Santiago, the pilot began to descend, convinced that the aircraft had safely passed over the Andes. Instead, the Andes lay dead ahead. The plane, delayed by the jet stream, flew smack into Mount Tupungato.

The crash was probably so swift and so devastating that the 11 passengers and crew hardly felt a thing. Within seconds, they apparently disappeared into the snow, buried in a glacial graveyard.

A Trip Under the Ice

1. Convinced they had passed over the Andes, the crew accidentally flew Star Dust into Mount Tupungato.

2. The crash triggered an avalanche, burying Star Dust in snow.

3. Repeated snowfalls turned to glacial ice, burying the plane deeper in the glacier.

4. Over time, the glacier carried the wreckage slowly down the mountain.

5. Years later, the wreckage reached a lower altitude where the glacier is melting and parts were exposed to the air.