China is the second biggest economy in the world next to that of America. Despite being clouded in mystery and remained in isolation until several decades ago, the Chinese were able to catch up fast with the rest of the world and become a force to reckon with that it is today. Not only does China have one of the biggest land space and highest population on the planet, many of the products sold in other countries are actually “Made in China” too. 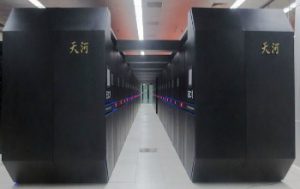 The Chinese definitely are competitive and they don’t stop just by being a big economic giant. They continue with their quest to develop innovative technologies that can make a big impact on human lives someday. And knowing that computers are at the heart of any technology, China has just recently launched the fastest supercomputer in the world that only uses local chip technology and even hardware (semiconductors). The decision to use and create exclusive Chinese materials is partly influenced by the US move to ban the exportation of high-performance computing chips to the Chinese just the previous year.

China is developing a third prototype exascale computing machine — also known as a super supercomputer — and plans to launch it by June next year.

The Sunway exascale computer prototype is being developed by the National Research Center of Parallel Computer Engineering and Technology and the National Supercomputing Center in Jinan, the capital of east China’s Shandong Province.

The NRCPC was behind the Sunway TaihuLight, the world’s fastest computer at the 2016 and 2017 International Supercomputing Conferences in Frankfurt, Germany.

An exascale computer is able to execute a quintillion calculations per second, around eight times faster than the Sunway TaihuLight.

The increase in speed will advance research in climate change, space science, medicine and oceanology among others, developers said.

Supercomputers are actually vital in carrying out scientific researches and in promoting national safety and security and often perform a variety of tasks that only a supercomputer is capable of doing. It can even be an effective medium to finally address cybersecurity issues, nuclear technology, and other big data applications – sensitive yet timely issues faced by our modern world today.

China only started producing its first computer chips in 2001. But its chip industry has developed at an awesome pace.

So much so that Chinese-made chips power the world’s most powerful supercomputer, which is Chinese too.

The computer, known as the Sunway TaihuLight, contains some 41,000 chips and can carry out 93 quadrillion calculations per second. That’s twice as fast as the next-most-powerful supercomputer on the planet (which also happens to be Chinese).

The mind-boggling amount of calculations computers like this can carry out in the blink of an eye can help crunch incredibly complicated data – such as variations in weather patterns over months and years and decades.

The Chinese government is steadfast in its efforts to end reliance on foreign or imported technology and develop their own ideas and innovations using materials designed and created by the Chinese themselves. Not only will they be able to customize the materials they need but likewise reduce costs since everything will be done locally. While the US initially tried to bully China by denying it of access to resources they need to pursue their tech ambitions because of allegations of nuclear testing activities, the Chinese were quick to get back on their feet. And now, it seems that their move actually backfired on them as China is taking the lead in the field of supercomputers and have learned to be independent of Western influence in procuring needed materials like computer chips, etc.

The US is not even close to creating a technology nearly similar to what China has accomplished so far. Everyone in the tech world is quite impressed with this latest Chinese supercomputer that is also followed by another Chinese supercomputer in the second lead. The US has a lot to catch up on and by the time they do finally catch up, the Chinese could possibly develop a far more superior technology that equals no other.