We have seen our fair share of ordinary to outrageous toys over the years. From simple building blocks and chew toys for young kids to more expensive toys for the young and big boys alike like Playstation, Wii, and Xbox, most kids now consider smartphones, iPads, and tablets as their go-to toys to fight off daily boredom. Technology-based toys may be the norm today but the experts recommend active play among young kids for normal growth and development. 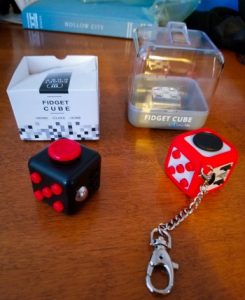 Today, fidget toys are gaining popularity. They are excellent stress relievers for the chronically stressed and anxious and as a management for children diagnosed with ADHD. We can’t deny that life is more stressful now than it did decades ago. Technology was supposed to make our lives better and easier but it appears to be doing the opposite, albeit many of you will probably deny it. We absolutely adore social media and the Internet but we end up losing more precious time for ourselves to relax and recharge to keep our sanity intact.

They’ve been popping up almost everywhere lately: on Facebook, on Instagram, in BuzzFeed articles, and even in classrooms. Fidget toys have been called “life changers” for some people, enabling them to pay attention in situations, feel calmer, and reduce their outbursts. According to CBS, “The Fidget Cube is the ninth-most funded project on Kickstarter, with creators raising nearly $6.5 million from backers. They say it’s designed to help you focus. Forbes even dubbed Fidget Spinners the must-have office toy for adults for 2017.”

Fidget toys help children and adults with focus and attention. They have been called “self-regulation” toys that calm people down and allow them to actively listen. These toys come in all shapes and sizes, though they may be called different things. In the past, we have had stress balls, but these are more effective. They have moving parts that people can move around or “fidget” with, using the tactile input to calm them down. Some fidget toys are as simple a lever that one can push back and forth while others have parts that interconnect. It sometimes takes a few tries to get the “right” fidget toy.

Who Are Fidget Toys For?

It is easy for people to see that their child is restless at times, but it is harder to tell if they are restless at school. Often times, there are the children that don’t do as well in classes, often get in trouble, or just can’t sit still. For many of these children, they need more stimulation than just a lecture or sitting and listening to someone talk. Of course, fidget toys have been particularly helpful with autistic children. Even in adults, the same can be said – for adults whose minds just continue to go, fidget toys allow them to be more attentive.

A fidget toy is not your ordinary toy because it serves a specific purpose: calm down the person and help you keep your focus. Playing with a fidget toy is especially helpful for people who fears public speaking, have anxiety issues, or those diagnosed with ADHD. And its beauty lies in its simplicity.

A small, six-sided gadget, the fidget cube is a simple toy featuring, among other things, a tiny joystick, gears and a rolling ball, and something akin to a little light switch.

The features don’t do anything, except move back and forth. The goal is simply to let fidgeters fidget.

“This behavior isn’t one that should continue to be stigmatized and mocked as unbecoming or inappropriate,” the company founders, brothers Matthew and Mark McLachlan, wrote on its crowd funding Kickstarter page. “We are passionate about the idea that fidgeting is a process that, with the right tools and outlet, can have positive and real-life applications.”

And most of all, it helps improve both mental and physical health aside from keeping you entertained with your endless fidgeting.

The Fidget Cube is the ninth-most funded project on Kickstarter, with creators raising nearly $6.5 million from backers. They say it’s designed to help you focus. Forbes even dubbed Fidget Spinners the must-have office toy for adults for 2017.

“I think a Slinky is one of the earliest fidget toys,” psychologist Dr. Harris Stratyner said.

“When they fidget with a fidget toy, it takes their mind off — it soothes their mind. So it’s mind and body are one,” Stratyner said.

He said the toys can really help just about anyone focus.

“You can also generate ideas. It just centers you,” Stratyner said. “And when you’re fidgeting with something, your hands are feeding back to your brain a signal that you’re involved in a repetitive task. That repetitive task frees up your mind.”

Fidget toys are not new in the market. From slinkies to Rubix cube, children played with fidget toys over the decades. And while these toys are now sporting a different and more modern look, nothing much has changed to how it works. Fidget toys serve a dual purpose of being a toy and being a handy stress reliever. I’m sure you can’t wait to get your hands on one too. It can come in handy in times of stress or a difficult life crisis where you can’t think straight and visibly worked up but needs to keep your composure.

Kids these days will benefit more from a fidget toy than a tablet full of interesting games and apps. It helps stimulate the young minds of children without providing them instant gratification they often get from smart gadgets. A good mix of new and old toys like these is the perfect arsenal for growing kids without hearing them constantly complain of boredom.