A parent’s life changes once kids come into the picture. It is no longer just about yourself but about that cute and tiny human being whose entire life now depends on you. Your kid becomes the center of your world and you try to parent the child the best way you know how. 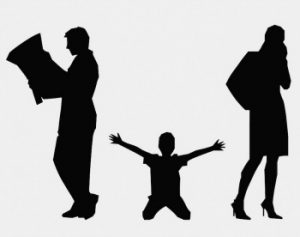 While most households are made up of a father, a mother, and the kids, many families right now are led by single parents. Divorce is no longer as controversial as it once was but just as traumatic for any child. But parents must learn to set aside their differences if they truly love their child and will put his / her best interest in mind. Co-parenting is not easy. It means you have to deal with (or even be friends with) the person who used to be your lover but became your worst enemy (most likely). You have no choice but to do that for the sake of your child.

Children are the ones most affected by this sudden uprooting of family dynamics, said John Chirban, licensed psychologist and Cambridge Counseling Associates director.

Children will often hide their feelings and lie to adults when asked how they feel about their parent’s divorce.

Whether they are toddlers or preteens, children are more in tune with their surroundings and their family than one might think, Chirban said.

As this survey showed, children often lied and only said what they thought parents wanted to hear, he said. Some children may internalize the problem and see themselves as the cause of the stress.

Parents should be careful in not letting their frustrations with each other spill into their relationship with their children, Chirban said. Conflict may cause serious strain and seriously negatively impact children, which may not easily be fixed.

About 70 percent of children who went through therapy because their parents were divorcing said they did not find it helpful at all, he said. It’s an awkward thing for any child, and sometimes, the connection between the counselor and child is not there.

“Many kids feel like their childhood ends — and often it does,” Chirban said.

That just goes to show how affected kids are in the case of a divorce. Parents should swallow their pride and not deprive their kids of a chance to spend time with the other parent no matter how hard it may be.

Should parents have shared, 50-50 custody (or close to it) after a divorce? A new study says yes.

The status quo relative to child custody proceedings now in the United States is that children — especially young children — should have a “primary parent” (usually the mother) after a divorce, visiting with the “noncustodial parent” (usually the father) typically every other weekend. However, recent studies suggest that children, even infants and toddlers, benefit from as close to equal time as possible with each parent after a divorce.

“Good quality relationships with parents in young adulthood predict better stress-related physical and mental health for the children later in life,” said William Fabricius, lead author of the new study and an associate professor of psychology at Arizona State University. “So in a real sense, this [parenting time for young children after a divorce] becomes a public health issue.”

Regardless of how the relationship ended, both parents must make an effort to co-parent for the child’s sake. While mothers often get custody, a child’s relationship with his/ her father can also determine how well the child turns up in life.

Said Brennan, “While many recognize fatherlessness as a top social issue in America, legislators are just learning the degree to which family courts contribute to this problem. Using the low estimate, family courts create a fatherless child every 60 seconds, and fatherlessness is linked to every major social pathology in children including: violent crime, drug and alcohol abuse, truancy, unwed pregnancies, psychological disorders and even suicide.”

Asked how we should improve laws governing our family courts, Brennan said: “We’ll improve the outcomes for children when we treat family separation in the same manner we do other social pathologies: by listening to the experts. We now have a very strong body of research showing shared parenting is best for children and the backing of a significant number of psychologists, psychiatrists, social workers, child development experts and domestic violence practitioners. Yet because these issues play out in a court of law, rather than listening to these experts, the issue becomes political, and lobbyists hired by state bar associations advocate to grow family law as a business, rather than do what’s best for kids. It’s time expert voices take precedence over the legal establishment.”

Children will grow up according to how they are raised. And how a child turns up as an adult is a shared responsibility between both parents even though they have already parted ways. A lot of conflict among the teens and young adults right now could have been avoided if their parents were able to establish a healthy and close relationship with them as a child. Divorce shouldn’t have stopped them from being good parents and role models to their children.