Politics has always been a man’s world. Ever since the world we know started, men dominated this field. But we may be mistaken after all. There are reports of matriarchal societies in the not-so-distant past often led by the healer (often a woman) or the most dominant women of the tribe/ clan. 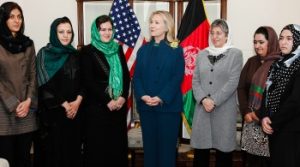 So, it should not come as a surprise that women can be great world leaders too. Although it is not yet the time for America to elect its first woman president, the feat has been done in other countries in the past and until the present day. Enjoying equal voting right was just the beginning. Women did their part in shaping our society into a global community that welcomes the ideas and contribution of everyone regardless of gender but it seems that the number of women leaders have stagnated in recent years.

The number of women in executive roles in government and parliament globally has stagnated with only minor improvements since 2015, according to a new report by U.N. Women, with the Americas witnessing the most gains compared to other regions.

In the Americas, which includes North and South America and the Caribbean, women’s representation has gone up from 22.4 percent in 2015 to 25 percent in 2017.

In comparison, women’s representation in Europe stands at 22.5 percent, up slightly from 21.6 percent in 2015. In Asia, the number has risen from just 10.6 percent to 11 percent, while in Africa women hold 19.7 percent of the region’s ministerial posts.

The top five countries with the largest share of women ministers are in Europe and the Americas, with Canada and Sandinista-run Nicaragua leading the way with more than 50 percent of ministerial positions filled by women.

Other women leaders acknowledge the fact that not enough women get into higher ranks or positions in politics than they would’ve wanted to.

In 2012, Julia Gillard gave a speech that went viral. During a debate in parliament, Australia‘s first female prime minister delivered a 15-minute rebuke of Tony Abbott, the leader of the opposition, in which she branded him a sexist and a misogynist.

And it seems that she is right and that not much has changed over the years.

Five years on, Gillard still finds women crossing the road to congratulate her. She will be sitting on a plane and another passenger will lean over and mention the incident.

In some cases, she tells IBTimes UK during an interview in Dubai, the only thing that person will know about Australia is kangaroos, koalas – and her speech.

And she experienced it first-hand herself.

“If there are women in the world that find that speech inspiring and it is the only thing they know about Australian politics, well, that is a pretty good thing.”

Those who know a little more about Australia will also be likely to remember Gillard’s exit from politics in an ugly power struggle that saw her ousted by her political rival and former boss, Kevin Rudd, after just three years in power. Both Rudd and Gillard had pledged to resign if the other triumphed, and Gillard made good on that pledge in June 2013 when Rudd beat her by just 12 votes.

But she remains to have high hopes for all the women to break barriers and enjoy equal opportunities and same respect as their male counterparts.

“When you look around the world, women still tend not to be represented in anything like equal numbers,” she explains. “For me, this comes down to a very simple concept: if you believe that men and women are equal and have equal capacities and if you look at our world and you aren’t seeing half and half when it comes to the leadership of nations then means there are still barriers preventing women coming through,” she says.

But there is a slim chance that women can conquer the political environment in more conservative countries like Russia.

Russians are growing colder on the idea of women taking part in politics and the majority say they are not ready to see a woman lead their country in the next 15 years, a new poll finds.

Two thirds of Russians (66 percent) still approve of women participating in politics, according to a poll by independent survey company Levada Center, which is a drop by 11 points since last year.

Women have achieved so much over the last century but more work still needs to be done. The world at large is more accepting of women and women thrive in certain industries like fashion, communication, and education among others. Many have even filled up important posts in companies and even started their very own.

However, politics is a different arena. While a lot of women have been elected into office for various government positions, it is still predominantly dominated by men. We must first change our view of women and see them as equals to men before even bigger changes can be seen to our society in general.