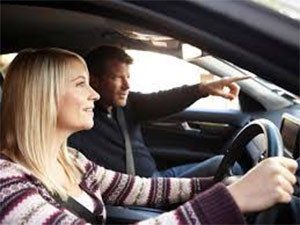 Sarah’s little brother drives her crazy, even when she’s doing the driving. “‘I don’t want to go to school! Take me home! Stop playing that song!’ Driving him to school is frustrating,” groans 18-year-old Sarah Odle, a volunteer at United Way Yuma. Even worse, it can be dangerous. “I know,” Odle says, “because I recently cut off another car on a one-lane bridge while trying to explain why we weren’t turning back to get his Yu-Gi-Oh! toys from home.”

Lose your focus at school and your grades suffer. But lose your focus while driving a car and you risk injuring or killing yourself, your passengers, and others. Motor vehicle accidents are the number one cause of death for Americans between the ages of 3 and 33. Teens in particular are at risk; the crash rate for 16- to 19-year-olds is four times the rate for older drivers.

Inexperience is part of the problem. So are the circumstances under which people sometimes choose to drive: when they’re distracted, drowsy, or downright irritable. Here’s how to keep your eyes–and mind–on the road.

Distracted driving is a factor in 25 percent of all reported crashes, according to the National Highway Traffic Safety Administration. Distraction can take many forms, including the friendly kind. Studies show that the presence of one passenger pal in a car with a teenage driver nearly doubles the risk of a fatal crash. With two or more passengers, the risk is fivefold. Because of those dangers, some states prohibit new drivers from having any passengers other than family members in the car. As fun as passengers may be, they can also be dangerous.

Another driver distraction? Talking on a cell phone. And don’t congratulate yourself if you use a headset while driving. “Cell phones impair driving ability not only because they take your hands away from the wheel but also because of the cognitive distraction of being mentally engaged in the conversation,” explains Susan Ferguson, a research expert at the Insurance Institute for Highway Safety.

* Don’t multitask. Don’t eat, apply makeup, shave, or read while you’re driving.) Have a passenger play DJ with the CDs, or wait till you’ve stopped at a light to set up your musical selection.

* Pull over if you need to take or place a phone call. In an emergency, use your best judgment to decide whether it’s necessary to make a call en route.

Sometimes distractions are literally all in your head–for example, when you get in the car after a fight at home. Being stressed can lead to aggressive driving behaviors, such as tailgating and cutting off other cars. No matter what else is going on, don’t let your emotions get to you behind the wheel.

“People wouldn’t dream of pushing to the front of the line at the supermarket because they were rushed or in a bad mood,” says

Fairley Washington, a spokesperson for the AAA Foundation for Traffic Safety in Washington, D.C. “But they’ll do it in their car because they have a degree of anonymity there. They lose concern for their fellow drivers.”

You may not be able to change your emotions, but you can control how you react to them.

* Leave earlier. For every 15 minutes you expect a trip to take, allow an extra five minutes to reach your destination.

* Calm down. When you know you’re in a foul mood, listen to a soothing CD or practice a relaxation technique like deep breathing.

Wide Awake at the Wheel

Lack of sleep is another big factor in car crashes. “One winter morning about two months after I got my license, I was driving to school … exhausted,” recalls Jessica Billings, 18, of Bloomington, Minn. “I stopped at a light, and when it turned green I started to accelerate. But I didn’t notice that two cars ahead of me, someone had put on the brakes to make a turn, and I rear-ended the man in front of me.”

Drowsy driving is responsible for approximately 100,000 crashes a year in the United States, reports the National Sleep Foundation (NSF). Driver fatigue can compromise reaction time, judgment, and even vision. Young people are among those at highest risk. “Next to infants, teens require the most sleep of any age group, yet often [they] don’t get nearly enough,” says Colleen Cancio, government affairs manager at NSF.

As Jessica found out, drowsy driving isn’t just an after-dark problem. Based on humans’ sleep-wake cycle (also called circadian rhythm), people are most likely to nod off at 2 a.m. and again at 2 p.m.–a time of the day when many teen drivers are pulling out of the school parking lot after the last bell. To prevent accidents, be sure to get eight or nine hours of sleep.

* drifting out of your lane, tailgating, or hitting a rumble strip

* difficulty keeping your head up

Unfortunately, common stay-awake strategies such as opening the windows, snacking, or blasting the radio haven’t been scientifically shown to work. If you experience any of the red flags listed previously, pull off the road at the nearest safe place and call a parent or friend to come pick you up.

One thought on “Drive Right And Survive Alive!”