For the longest time, mankind has been coming up with various superstitions and nonsense beliefs if they can’t explain something logically or scientifically. We try to make sense of everything that’s happening around us, so many freaks out when something happens that is out of the ordinary. An eclipse is something that has captivated us for years and left us in awe on the many mysteries that surround us. There have been numerous stories and myths but nothing really factual aside from the fact that there are instances during the moon’s orbit between the earth and the sun, it blocks the sun casting a shadow onto the planet. 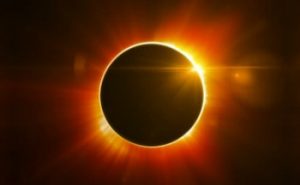 People believe a long list of Eclipse-related superstitions but why do you think these stories became popular in the first place? Pregnant women are advised to avoid it because it is bad for the unborn child. People are also advised not to look at it directly even with sunglasses on as it can harm your vision. Sorry to burst your bubble but eclipses aren’t really a big threat to us. Well, you should actually feel relieved. The sun’s radiation may be even harmful than eclipses and we get exposed to sunlight every single day, yet we don’t make a big deal out of it.

On Aug. 21, a 70-mile-wide ribbon from Oregon to South Carolina called the “path of totality” will experience a total solar eclipse. Large swaths of farmland in the Great Plains and Midwest will be plunged into darkness for 2 1/2 minutes, and temperatures will drop about 10 degrees in the middle of the day.

But as millions of people look up at the sky, many Midwest scientists will turn their eyes and cameras toward the plants and animals on the ground. And they’re not sure what will happen.

Speck says different parts of the Earth experience a total eclipse about once a year, and that makes tracking changes in animal and plant behavior challenging.

Not just solely obsessed with unfounded doubts and stories, scientists now look somewhere else during eclipses – down. Given that there are certain changes in our surroundings as the moon covers the sun for a short period of time, they want to know more about its effects to living things on the planet like plants and animals. It makes perfect sense because even if plants can’t talk, there are certain movements that indicate how plants cope to changes in the environment. Scientists want to know how plants will cope to the sudden darkness and drop in temperature because it hasn’t been fully studied in the past.

Crickets will chirp, cows will march back to their barns and swarms of once-busy honeybees will fly hurriedly home to their hives when a total solar eclipse sweeps across the U.S. next week.

The sudden darkness that comes when the moon momentarily blocks the entire sun on Aug. 21 will cause some animals to experience a range of reactions, including confusion, fright and excitement, experts say. While animals like insects and bats behave as if nighttime has simply come early, other more intelligent animals — chimpanzees, dolphins and llamas — appear to stop and stare at the sky, showing signs of understanding a celestial phenomenon is occurring, or at least that something is off.

“The smarter animals freak out,” said Dr. Douglas Duncan, the director of the Fiske Planetarium at the University of Colorado. “I think it’s likely that really smart animals react differently.”

Animals also act a little strange in response to these changes like eclipses no matter how short it may seem. But of course, various animals react differently. Smarter animals pause for a while and direct all their attention to the sky, as if understanding that a phenomenon beyond our power is happening that very moment. Meanwhile, not so intelligent animals cower in fear and wait for the sun to shine again during solar eclipses. Unlike plants, scientists have already spent a great deal of time studying animal behaviors in response to these scenarios.

Now, is an eclipse really something you should be alarmed of? Learn from plants and animals that have been more observant of their surroundings than humans do. These things happen and are normal. While we don’t always get the answers we want to hear, it is safe to say now that life will go on as usual after eclipses happen. It’s been that way for millions of years. The best thing you could do is to enjoy the experience and learn from it because not everyone gets to see an eclipse in their lifetime.