Humans have specific needs, the need for food, water, shelter, and education among others (sleep, too, with no snoring!). Once these needs are met, other needs can also be met but these primary needs must be met first because it is crucial for our survival. You die if you don’t eat or drink water. You put your safety and security at risk if you have no shelter from the elements and from all the bad people out there. Education enables us to reach our dreams and aspirations in life but isn’t as crucial as the other three because many people in the world actually live and die uneducated. 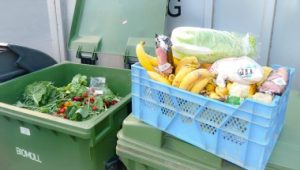 As society progresses, the division between the rich and the poor becomes even more pronounced. You can see rich people spending money on luxuries we can only dream of while a big majority of the population suffer in poverty. The poor struggle to earn enough money for food. While those who can afford form long queues on supermarkets, others look for scrap to satiate their hunger. The sad thing is that while many suffer and die of hunger, you can also see tons and tons of food waste from restaurants, fast foods, groceries, and markets. Some food is thrown because they don’t pass quality control while others were a little past their expiry.

Imagine going to the grocery store, buying three bags of food, loading two into your car, and mindlessly leaving the third in the parking lot as you drive away. Think you’d never do that? Think again: As Dana Gunders, a senior scientist with the National Resources Defense Council (NRDC) and author of The Waste Free Kitchen Handbook (Chronicle Books, 2015), writes on her blog: “Right now, we’re literally trashing more than one-third of our food supply — an ongoing crime against hunger, the environment, efficiency, and common sense.”

Food waste (or wasted food) is a massive global problem of relatively recent origin. One hundred years ago — maybe even 60 years ago — there was little, if any, agricultural waste; and food didn’t travel thousands of miles in order for a Santa Fe grocery store to sell strawberries from South America in January. The NRDC has a few more sobering statistics: Only 60 percent of food produced in the U.S. is consumed; 20 percent of the food we buy is never eaten; and 90 percent of us throw excess or leftover food away too soon — adding up to about 300 pounds of wasted food per person — a habit NDRC calculates costs a family of four $1,500 a year and places enormous stress on the environment.

Imagine all those foods go to waste instead of feeding hungry stomachs. Times like this you’d seriously wonder how low society has become. If food doesn’t make the cut for whatever reason, why not give it away to the poor than to the trash can.

Food waste is also a big talker in the restaurant industry. Consider these facts:

» Every year, American consumers, businesses and farms spend $218 billion (roughly 1.3 percent of this country’s gross domestic product) on food that is never eaten.

» Nearly 85 percent of all food waste happens in homes or consumer-facing businesses, such as restaurants, retail grocers and institution cafeterias.

» The average amount of purchased food that is wasted in a full-service restaurant is 11.3 percent.

Need we say more? Not only do we waste precious resource and become a part of the problem but chemicals from food waste are also bad for the environment. We should all strive to reduce our carbon footprint even the simplest ways possible.

The numbers are as shocking as they are appalling.

At a time when one in eight families in America struggles to put dinner on the table, a whopping 40 percent of the food produced in the country never gets eaten.

Some of it rots in the field before it can get harvested or gets lost or damaged during processing and packaging; other food items get tossed on the way to market because they’re too ugly to be displayed in the grocery store. Thousands of pounds of leftovers end up in the trash because by the time we remember they’re in the fridge, they’re moldy.

Confusion over food labels only adds to the problem.

If you don’t know the difference between “best by,” an advisory that simply means the product will taste best up until that date, but is still edible a few days after, and “sell by,” a date that helps stores keep track of inventory that needs to be bought by a certain time, you are not alone. Labels can be tricky to negotiate — they vary from state-to-state or even manufacturer-to-manufacturer — that 90 percent of Americans throw away food that’s perfectly edible. Twenty percent of the food we buy never gets eaten.

“People assume food labels are federally mandated, but they’re not, other than for baby food,” notes JoAnne Berkenkamp, a senior advocate in the Food & Agriculture Program at the Natural Resources Defense Council, an environmental activist organization. “They also widely assume the dates means the food is no longer safe to eat, and that is almost uniformly untrue. They just indicate when the food is at its freshest.”

All told, we toss more than 23 pounds of food per person per month at home and in restaurants, or 35 pounds per person if you add in food retail. That’s more than 45 bananas or two whole turkeys per capita, and that doesn’t even reflect the additional losses in distribution, food manufacturing and farming, Berkenkamp notes.

The statistics have spoken. Since when did we become this selfish and wasteful? The abundance of food in the market does not mean we can waste as much as we want. Resources are dwindling while the population keeps on ballooning. Let this be a lesson to everybody not only to people who are directly working in the food business. Proper planning, management, and inventory can prevent this problem. In case there are indeed leftovers, why not donate it to animal shelters or donate to food banks or soup kitchens food that is nearing their expiration.

The world is under so much stress these days. From the dangers of technology, the abuse of humans and the threats of climate change, the world can only take so much. It just goes to show that we don’t value the planet by adding insult to injury through the waste of resources or lack of the compassion to the other person by choosing to throw away food than giving it to the less fortunate.