We aspire to be at our best and healthiest but there are certain indulgences we can’t seem to resist. They may come in different forms and sizes and their effects on us varies too but we usually call them the same name: vices. Of course, the word vice in itself already has a negative connotation, an undying stigma it has to deal with to infinity and beyond, perhaps, because most of these bad habits have indeed messed up people’s lives and are the bane of society. You might ask why, the answer is obvious. People do a lot of crazy stuff when they are under the influence of these vices, most common of which are alcohol and illegal drug use. 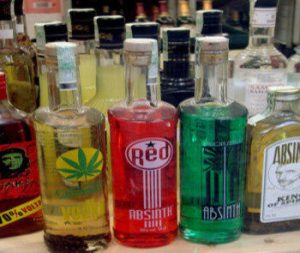 While also considered a taboo and a prohibited substance for the longest time, things have definitely looked better for the unassuming weed that we know as marijuana. Since the hippie days, cannabis advocates have never ceased to show to the world the beauty of marijuana but it fell on deaf ears for the longest time. You can’t blame the public, though, as there was also a negative side to it brought by the natural high weed is known to elicit back then. Well, it has not changed now but at least we have options. You aren’t just stuck with the recreational-type that is highly addicting and gives you all the feels but there is also medical cannabis that is devoid of the negative aspects weed used to be known for but have lots of beneficial health effects that people can’t get enough of.

Sales of alcoholic beverages decline following the enactment of medical marijuana access laws, according to a working paper authored by a team of researchers from the University of Connecticut and Georgia State University.

Researchers concluded: “We find that marijuana and alcohol are strong substitutes. … States legalizing medical marijuana use experience significant decreases in the aggregate sale of alcohol, beer and wine. Moreover, the effects are not short-lived, with significant reductions observed up to 24 months after the passage of the law.”

As a result of the growth of the medical marijuana industry, many states have pushed forth for its legalization if they haven’t done it yet by now. Along came with that is a rise in public awareness about the pros and cons of marijuana especially the benefits you can get from CBD-rich cannabis that are used in the management of various chronic health conditions. Even that of recreational cannabis use has increased as well in response to easier access to it, less strict laws, and a more permissive society. If there’s one more thing that people have noticed that was a result of the growth in the cannabis market is the decline in alcohol demand.

The researchers compared alcohol sales between states that implemented medical marijuana laws and those that didn’t, before and after the change in marijuana laws. They also corrected for a number of economic and demographic variables known to affect alcohol use, such as age, race and income.

“We find that marijuana and alcohol are strong substitutes” for each other, the study concludes. “Counties located in [medical marijuana] states reduced monthly alcohol sales by 15 percent” after the introduction of medical marijuana laws.

It might be good news for many or not depending on which of the two you prefer. It’s just that this study observed the relative correlation between alcohol consumption and marijuana use. Now that people can easily access cannabis, it has been discovered that those alcoholic beverages drinkers reduced their alcohol intake as per alcohol sales in the study’s demographic while marijuana use is becoming more popular than ever. When you think about it, alcohol is addicting while marijuana is not and the former tends to bring out the worst in you and more fatal too. If this premise deducted from the results of the study applies to the entire country, this news may be for our best interest after all.