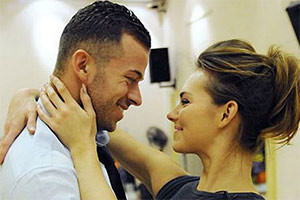 Andrew Miller, 13, used to end homework assignments with the slam of his bedroom door. “Homework was hard,” he said. “I yelled a lot.”

Frustration and fights over homework mounted at the Miller home until four years ago, when Andrew finally learned why he was struggling in school. Andrew has a reading disorder called dyslexia. People who have dyslexia have trouble connecting the sounds that make up spoken words with the letters that spell out those words on the written page. Those connections are essential for reading.

Andrew’s struggle with reading also troubled his older brother, Matt–so much so that it motivated Matt to learn more about dyslexia for an English assignment two years ago. “I wanted to learn about the disability that was influencing my brother’s life,” said Matt, now 15.

Matt hoped to find a way to help kids with dyslexia before they begin learning to read. Andrew’s dyslexia wasn’t diagnosed until fourth grade. By then, his mom said, “Andrew was losing his life. By virtue of tutoring multiple times a week, and the time it took him to do homework, he had lost his ability to be a kid after school. He didn’t have time!”

Matt logged on to the Internet, talked to experts, and eventually wrote a grant proposal requesting money for a pencil-and-paper test that educators use elsewhere in the country to diagnose dyslexia in kids who have yet to enter school.

Matt got an A on his proposal. When he showed the proposal to administrators at the Chartwell School in Monterey, Calif., where Andrew attended school, they liked it enough to forward it to the David Lucile Packard Foundation. Last year, the foundation awarded Chartwell $87,300 to implement Matt’s proposal!

Chartwell superintendent Jack Marchi couldn’t believe the news. “We’ve been applying for grants from the Packard Foundation for years and never received one,” he said. “This kid had the magic.”

Though dyslexia afflicts between 5 percent and 15 percent of Americans, researchers are just beginning to understand the origin of the disorder. “For many years, [people] thought that dyslexia resulted from poor schooling or poor parenting,” said Thomas Zeffiro, who codirects the Georgetown Center for the Study of Learning with his wife, Guinevere Eden. Experts now recognize dyslexia as a complicated condition that has biological roots.

Scientists studying those biological roots have tended to focus on the brain’s left hemisphere–the left side of the cerebrum. The cerebrum is the largest structure in the brain. It has two halves, or hemispheres (left and right), that act together to coordinate movement, perception, and other mental tasks.

Zeffiro and Eden recently discovered that areas other than the left hemisphere seem to play a role in dyslexia too. They made their discovery while scanning people’s brains using a functional magnetic resonance imaging (fMRI) machine. An fMRI machine employs a collection of magnets and a computer to produce color-coded two- and three-dimensional images of the brain.

This image shows areas in the brain that were active when people were asked to look at dots moving across a computer screen.

Green = activity in both groups

In the study, the researchers used fMRI while asking people to identify the phonemes in words. Phonemes are the units of sound that make up spoken language.

The brain scans revealed striking differences between the people who read normally and those who were dyslexic. In the nondyslexic readers, several regions of the left hemisphere appeared brightly colored on the scans, meaning those areas were active during the tests. In the dyslexics, those areas were not as active.

The researchers discovered something else. When they asked the people to look at dots moving across a computer screen, the fMRI scans revealed activity in both the right and left hemispheres of the nondyslexic readers. However, in the dyslexics, those areas were not as active. The areas of the brain involved in processing visual motion “weren’t revving up” said Zeffiro.

Because the moving-dot test did not require the subjects to read, Zeffiro and Eden hope to use a similar test someday to help diagnose dyslexia in children who haven’t yet started learning to read.