Air travel imposes a lot of restrictions on travelers. From check in until arrival, passengers must observe air travel etiquette that is widely practiced in the industry throughout the globe, most of which are precautionary measures for the safety of everyone on the flight. 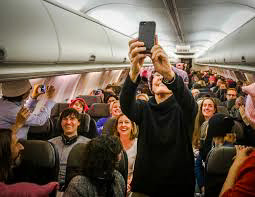 While most restrictions include limitations on baggage weight and content (checked-in or hand carry), the use of electronics in-flight is also a big no-no. Although using electrical gadgets has actually been allowed on longer flights, the U.S. now imposes a strict rule to ban the use of electronics on some U.S.-bound flights.

The US government will soon begin enforcing a ban on travelers bringing electronics in carry-on luggage on some flights traveling to the US.

News of the ban landed Monday when Royal Jordanian Airlines said in a since-deleted tweet that it received a directive from “concerned US departments” that passengers would not be permitted to bring any electronic items into the plane’s cabin, except cellphones and medical devices.

Cameras, tablets and ebooks, laptops, and other electronics will have to be packed into checked luggage, said an emailed confidential Homeland Security edict to airlines.

The ban is expected to go into effect on Tuesday, and affect flights from several countries in the Middle East and Africa.

A spokesperson for Homeland Security would not comment on the potential security precautions, but said the department would “provide an update when appropriate.”

As expected, a major policy like this that impact a great number of people is sure to hit the headlines here and abroad.

The US government is expected to bar passengers from bringing any electronic device larger than a cellphone on some flights to and from the Middle East and Africa.

Royal Jordanian Airlines on Monday tweeted a description of an electronics ban implemented by the US. But the airline deleted the tweet a few hours later.

According to Royal Jordanian’s deleted tweet, all electronic devices apart from cellphones and necessary medical equipment must be checked in to the cargo hold with luggage. That includes laptops, cameras, tablets, and DVD players.

The airline indicated that the policy would go into effect on March 21.

These changes are a result of a security concern related to passengers on nonstop flights from some Middle Eastern countries, an unnamed US official told CNN’s Jon Ostrower.

What could have prompted such a bold move from the U.S. government? Is there a national security threat that we should all be aware of?

The prohibitions on electronics from select countries on flights to the U.S. is based on information developed overseas about a threat, an official told CBS News. The official said the electronics ban isn’t related to a specific threat, but is in response to intelligence gathered overseas.

The officials said the Department of Homeland Security is in the process of notifying the countries and airlines affected by the ban on large electronics. They will have 96 hours to implement the ban.

The standard protocol during air travel is that electronic gadgets should be hand carried by the passenger lest it gets lost during travel, for which the passenger could not sue the aircraft for its loss. But because of security reasons that could pose a threat to the U.S. national security, these measures are now put into place because of possible terroristic activities in the countries included in the list.

Such a move is not at all that surprising considering the President’s stance against terrorists and how he takes the safety of all Americans seriously. Since the ban is just temporary, it probably won’t hurt if the people concerned abide with it until the ban is lifted and the risk is no longer there.