Silicon Valley is the country’s hub for technology. Most computer and other tech-related start-ups had their humble beginnings in this place before they conquered the world. The brilliant minds behind their success are mostly men who have become famous icons that humanity will always look up to and be thankful for. Up to now, the majority of big tech companies are still founded and owned by men. 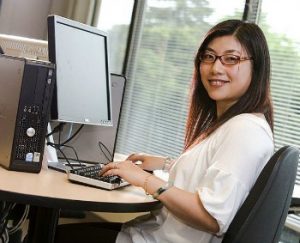 But as technology is becoming more mainstream, not only does it capture the interest of men but of women too. Even though it is a man’s world just like politics, more and more women are making a name in a niche they have no place for in the past. And we can look forward to countless women throughout the globe who will rise up to the challenge of carving their place in the tech world (not just in computers, mind you, but in other aspects of the technological race) in the years to come.

It’s all about embracing an industry that hasn’t traditionally favoured females.

Secondary school girls from across Scotland learned how to code and instruct robots after taking part in a computer science open day hosted by female students and academics at Heriot-Watt University.

The event was created specifically to help generate an interest in computing, artificial intelligence and robotics in girls from a young age.

It comes against a backdrop of a chronic shortage of women currently employed in or studying Science, Technology, Engineering and Maths (Stem subjects) in the UK.

The numbers do not lie.

Globally, women account for less than a third (28.4 per cent) of those employed in scientific research and development, according to a report published in November 2015 by the United Nations’ Educational, Scientific, and Cultural Organization’s (UNESCO) Institute of Statistics. They are also more likely to leave their roles in STEM fields, with a majority of women citing isolation, hostile male-dominated work environments and a lack of effective sponsors as the reasons behind their decision, says a Harvard Business Review research report.

Gender role is a big factor when it comes to choosing a career. Men are more likely to pursue a career in computing, engineering, or political science for they are deemed fit for a man. On the other hand, women end up as teachers, nurses, or plain old housewives. But women have had enough of this treatment and we’re bound to see major changes in the tech industry dynamics over time.

Four years ago, Sheryl Sandberg, chief operating officer of Facebook, sent her son and niece to a Silicon Valley coding camp where she was dismayed to see a stark gender disparity. “Out of the 35 kids, only five were girls and two of those girls were my niece and her friend,” she told me. “It’s terrible – it has to change!”

Sandberg, as COO of a company where women hold only 27 percent of top management jobs, should know. It is widely acknowledged that an ever-growing proportion of the better-paid jobs in the American workforce will be linked to digital technologies, and that women are strikingly underrepresented in computing science.

It seems that President Trump already got a plan in place for this particular concern.

Aside from limiting women’s careers, this trend could have wider consequences. The President’s Council of Advisors on Science and Technology estimated in 2012 that U.S. businesses will need to find about 1 million more STEM professionals than America currently has. Tech companies have hitherto plugged this gap by using the H-1B visa program to import engineers from places such as India. But President Donald Trump has pledged to curb the use of those visas. Getting more American girls into computer science could create a deeper bench of qualified workers.

It’s one of the rare good news we hear from the new administration considering how much backlash it is now receiving from their current economic policies. And it looks like they do have a clear plan in place.

The U.S. government could also help. Barack Obama’s efforts to address the gender balance didn’t generate much buzz. But the current White House certainly knows how to make waves – and Ivanka Trump says she wants to support #WomenWhoWork, to cite her hashtag. Instead of just championing women in politics, business, or fashion, perhaps Ivanka should start shouting about women in computer science, and team up with Sandberg and others like her. That might help shrink the shocking gender ratio for computer science and get America ready to embrace a tech future in an equitable way.

And changes are indeed taking place…

Now the good news is that insofar as culture – not neurology – established this pattern, efforts being made to reverse it are promising. Companies such as Facebook are targeting women in their recruitment. The nonprofit CSNYC has taken on the herculean task of teaching every student in New York City public schools certain computer science skills. In February 1999, Smith became the first American women’s college to announce its own engineering program. And some colleges, such as Harvey Mudd, have restructured computer science classes to be more attuned to female students’ relative inexperience with computing. This has had spectacular results. At Harvey Mudd, the proportion of female students in computer science classes has risen from 10 percent to 40 percent.

While attracting girls to pursue a career in computing science and excel in it at an early age may be the first of the many hurdles women will face in this industry, the other factor is that men itself. Men will trample all those weak and vulnerable women to get the position they want. It is a good thing that the industry itself is opening its doors for women and giving them a chance to succeed in a man’s world.