When it comes to weather, we can all be a bit cranky overall. Certainly, it does change depending on what we are used to, which is why for the normally temperate Southern California region, things seem quite strange at the moment. Storms have created the kind of 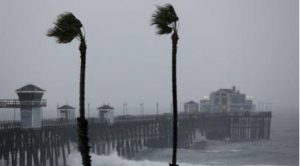 temperature ranges and precipitation that the region is not normally used to:

A river of moisture that arose in the western Pacific shot across the ocean toward Ventura and Los Angeles counties, then suddenly angled south into Orange and San Diego counties, drenching the region with heavy rains.

The storm caused sinkholes across Southern California. One swallowed two cars in Los Angeles. Another swallowed a fire truck in San Bernardino County.

By early Saturday, coastal San Diego County had recorded some of the region’s highest rainfall, notably La Jolla, which got 2.07” of precipitation. Escondido received 1.60” and Del Mar and Oceanside got 1.53”. The downpour caused the San Diego and Santa Margarita rivers to surge to life, as well as the marshlands that open onto Torrey Pines State Beach. It was littered with debris early Saturday.

The difference has meant quite a lot to most homeowners in the area, as winds have created serious issues for many tree services across the area. Because of falling trees due to wind, companies like San Diego’s All Clear Tree Service are finding that business is good, and that it could get better,

“We haven’t really seen this kind of moisture and storm this late in February in San Diego,” says All Clear owner/operator Glen Markstrom. “Obviously, this is good for our business, and we have been able to help out in a lot more storm situations than we normally would have.”

What is also quite unique for this Southern area is the relentlessness of the storms. It’s taken a lot of people by surprise.

Residents at an Encinitas apartment complex on South El Camino Real were evacuated on Friday afternoon after a pine tree collapsed and ruptured a gas line.

Hundreds of households from Barrio Logan and Golden Hill to Ramona and Chula Vista experienced power outages on Friday. By Saturday morning, power had been restored to most locations, according to San Diego Gas & Electric, and only 100 households in the Rancho Santa Fe area were without power.

Forecasters say the wind hit 75 mph at Palomar Mountain, which is equal to a category one hurricane. There were 60 mph gusts in Carlsbad and Imperial Beach, a 59 mph gust at North Island Naval Air Station and a 52 mph burst at San Diego International Airport, causing some anxious moments for air passengers.

While these temperatures, windspeeds and issues may seem incredibly small compared to similar systems in places like Louisiana and Florida, you have to remember the context: Southern California usually is not subject to this kind of moisture and storm activity. The result can be a fairly unprepared populace, which can make for some real issues that some climate groups have been warning about.

On the positive side, however, it is important to remember that California itself just last year was wracked by major droughts that had many people wondering if the state was going to survive it. Those conditions have changed so markedly that it’s practically insane in comparison:

More than 80 percent of California is no longer in drought after a series of winter storms, including last week’s hours long soaker in Southern California.

So with the good, come the bad. The bonus, of course is that sometimes, storms offer a great opportunity to rest and relax with your family, or perhaps even consider a new habit. Either way, we call this news excellent.