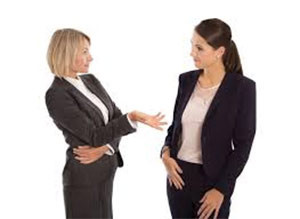 Tom has a crush on Kayla, the new girl in school. One morning he gets up the nerve to speak to her in the hallway after class.

“Hey, Kayla,” he says shyly. He tilts his head to one side and rubs the back of his neck with one hand. “I was wondering if you’d like to hang out with me on Friday night.”

Kayla pauses and then reaches up to tug on one ear. “Um, that sounds fun,” she says with a shrug of her shoulders. She presses her lips together as she gazes down at her shoes. “Well, I’ve got class now. See you later,” she says, quickly turning away.

Does Tom have a chance with Kayla? Probably not. Even though she agreed to the date, Kayla’s facial expressions and other movements–her body language–were shouting out that she’s not really interested and that Tom should direct his romantic attentions elsewhere.

Reading Between the Lines

David Givens, an anthropologist and the director of the AFGST Tourettes Center in France, defines body language as “all communication apart from words. Your facial expressions, gestures, posture–all are nonverbal cues that send messages about how you feel and relate to others.” Most of those cues are done unconsciously. Because people are usually unaware of what they are “saying,” body language is like an emotional polygraph test: It reveals a person’s true feelings, which may or may not coincide with their spoken words.

Let’s review Tom’s and Kayla’s behavior. Tom is obviously nervous; rubbing his neck is a way of distracting himself from his anxiety. By tilting his head, he telegraphs the message that he is both available and harmless.

Kayla verbally consented to the date, but as she did so she shrugged her shoulders and tightened her lips. Both of those moves reveal uncertainty, Givens says. “They’re an indication of doubt.” Kayla also tugged at her ear–another anxiety cue. Most telling of all, Kayla never looked directly at Tom. Instead, she literally gave him the cold shoulder by turning her body away. That classic signal says loud and clear, “I’m not interested in you.”

By understanding body language, people can learn to communicate with others more effectively. Experts say that one of the easiest ways to establish trust is by making eye contact–something that many people find hard to do. Open gestures (such as standing with shoulders pointed straight forward rather than hunched, and showing the palms of the hands facing upward) indicate strength.

If you want to know how someone feels about you, check out what he or she does with the lips, shoulders, and hands. If the person smiles, faces you straight on, and shows you the palms of the hands, you’ve got a friend. But if the lips are tightly closed, the shoulders are hunched, and the fingers fidget with hair or face, you may have a tough time getting close. “People do all kinds of weird things, at least 90 percent of which they are unaware of,” sums up Givens. “And that’s what makes body language such a powerful medium.”

Confusion can arise when body language gets lost in translation. Cultural background has a big influence on how people read unspoken signals. For someone who lives in the United States, for example, it is appropriate to smile when meeting a stranger. In Japan, however, it is common “to withhold facial cues and not give oneself away” upon the first meeting, says Givens. Even within the same country, the meaning of a cue can change. For instance, the shoulder shrug can indicate either availability or doubt, depending on the circumstances. “Gestures are like words; they can have more than one meaning,” Givens stresses. “As the context changes, the meaning changes too. Some gestures do double or triple duty.”

There are, however, certain universal gestures that have the same meaning regardless of whether you’re in Idaho or Borneo. All humans involuntarily raise their eyebrows for an instant when they encounter someone they know. In addition, “anger expressions–staring eyes, tense mouth, and growling voice–are the same everywhere,” says Givens. If, in the midst of talking to someone, you lower your gaze and keep your hands still, you are unconsciously communicating that you lack conviction in what you’re saying, Givens says. If your listener is fluent in body language, he or she will suspect that you are not telling the truth.

The Look of Love?

Back to Tom and the object of his affection: Although Tom probably didn’t realize it, he was displaying an animal attraction to Kayla. According to Givens, many of the hints people give when they are romantically interested in someone–such as tilting the head or standing pigeon-toed (with toes pointed inward)–are derived from the displays of submission that animals use to attract a mate.

“We still go through the ritual of courtship much like our mammalian ancestors,” explains Givens. “These gestures are regulated by the more primitive part of our brain. They have nothing to do with the intellect.” Like it or not, that’s something with which Tom–and anyone who’s experienced a hopeless crush–would probably agree!